For all students, having the opportunity to participate in sports results in positive outcomes, including physical development,1 social skills,2 and psychological well-being. The psychological benefits of sports specifically include improved emotional regulation,3 decreased hopelessness and suicidality,4 fewer depressive symptoms,5 and higher self-esteem.6 Research has also found that sports participation is related to greater feelings of school belonging and pro-school behaviors.7 Among LGBTQ youth specifically, research has found psychological well-being and school belonging benefits of sports participation.8 GLSEN’s research has shown that on a 4.0 scale, LGBTQ+ student athletes have a GPA that is 0.2 points higher than students who did not participate in athletics.9 LGTBQ+ team leaders have a GPA that is 0.4 points higher than their peers who did not participate in athletics. Further, 56% of LGBTQ+ team members and 66% of LGBTQ+ team leaders competing in high school sports report feeling a positive sense of belonging at school.10

State athletic association guidance is often the mechanism by which states establish standards for trans and nonbinary student participation in athletics. These standards vary significantly from state to state, with some state policies encouraging full participation and others creating discriminatory barriers. In addition, state legislators across the country have decided to champion and pass discriminatory legislation barring gender-affirming participation of transgender student athletes, and only allow students to compete on teams based on their sex assigned at birth as indicated on a student’s original birth certificate or by an invasive medical examination from a healthcare provider. This began with HB 500 in Idaho in 2020, and since then a rash of similar bills have been introduced in more than 30 states, with legislation being enacted in Arizona, Arkansas, Alabama, Florida, Kentucky, Mississippi, Montana, Oklahoma, South Dakota, Tennessee, Texas, Utah, and West Virginia. These laws are currently being challenged in a number of law suits.

In other states with discriminatory state athletic association guidance, such as Utah and South Dakota, athletic associations require undue and invasive “proof” that consists of confidential medical information that must be provided before a school allows a student to participate. Some of these standards list requirements such as documentation of surgery, hormone reports, or other sensitive medical information.

Conversely, in states with affirmative and inclusive guidance, students are given the opportunity to participate in ways that affirm their gender identity, even when that may not be consistent with a gender marker on their birth certificate or listed in school records. If their participation is questioned, some state guidance outlines procedures on how to address concerns, while maintaining the safety and privacy of the student in question. Lastly, some states, such as Alaska and Kansas, lack statewide guidance, which leaves decisions about inclusion of trans and nonbinary students to individual schools. 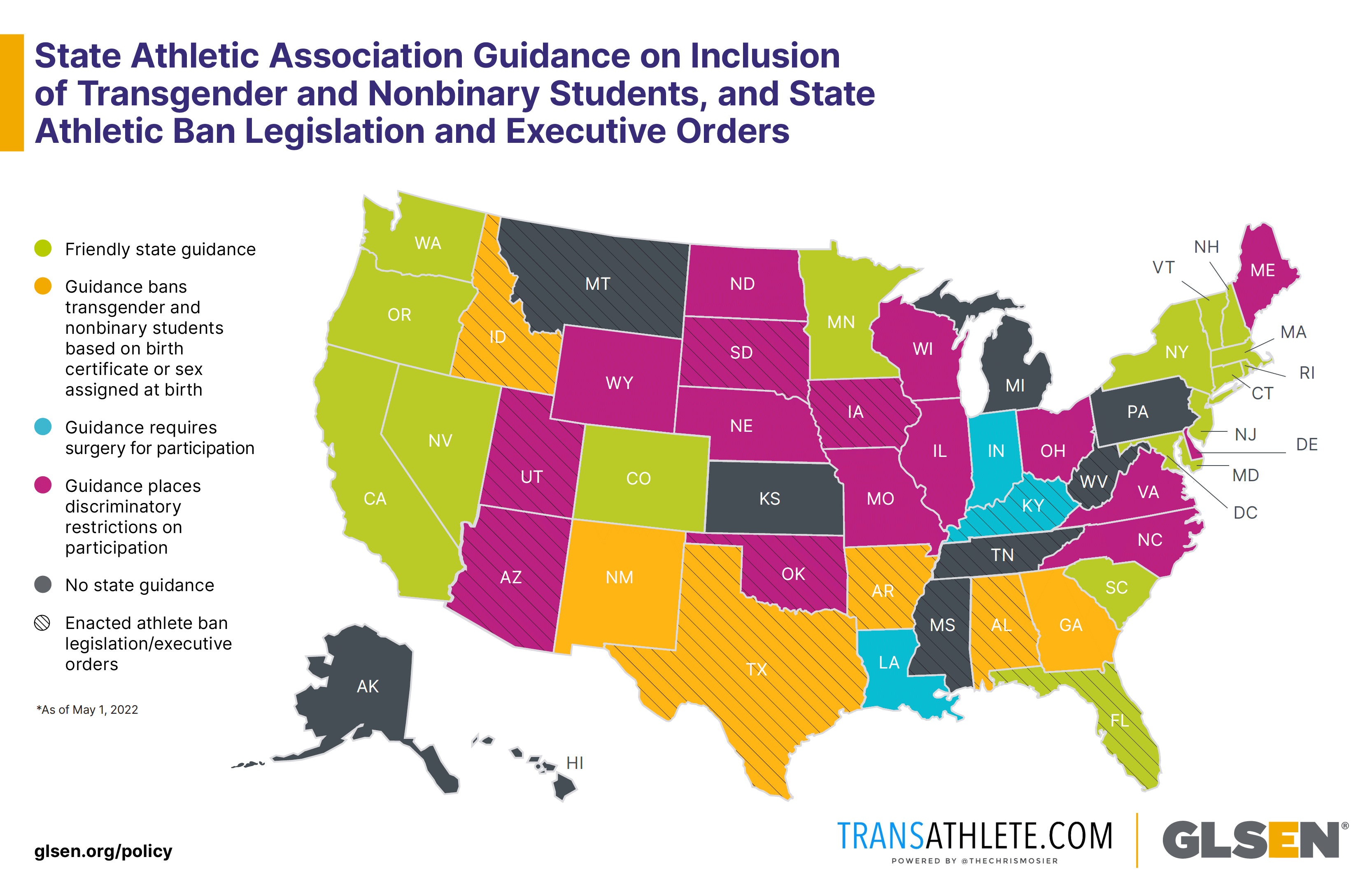 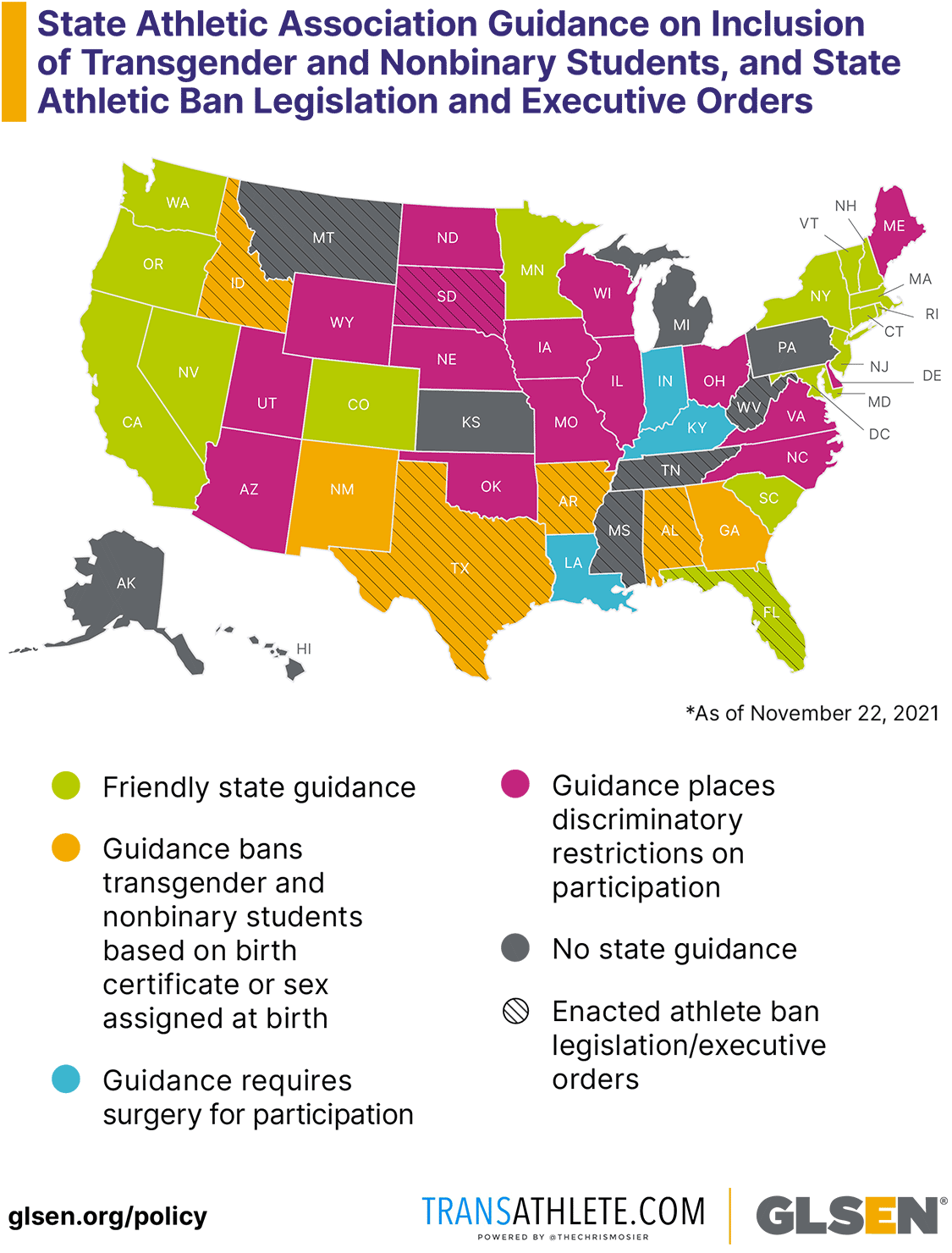 The Oregon School Activities Association (OSAA) issued guidance on the inclusion of trans and nonbinary student inclusion in K-12 athletics that affirms and supports their participation. These guidelines were developed in alignment with Oregon state nondiscrimination laws in public education (ORS 174.100). The OSAA Handbook16 policy states that students may participate in athletics that align with their gender identity, regardless of the gender marker listed on their birth certificate. The policy further clarifies and provides guidelines for participation of nonbinary students. Oregon’s policy prioritizes privacy and communication with trans and nonbinary students and ensures there is clear guidance for local education agencies and schools.

To ensure fairness and equality in athletic participation for all students, state athletic associations should develop guidance for local education agencies and schools that affirms and supports the right of trans and nonbinary students to participate in interscholastic and intramural sports. State athletic association guidance should include the following components that were adopted from existing guidance and resources: