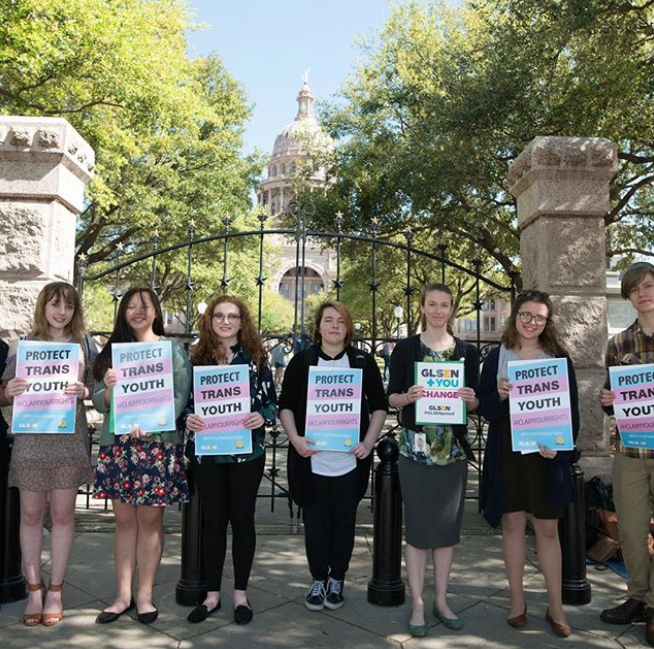 Passing and implementing comprehensive policies around key issues for LGBTQ students is crucial to ensuring that LGBTQ students can learn and grow in a supportive environment. These can include:

There are a number of ways educators and schools can support inclusive, comprehensive policies, as well as fight against discriminatory state legislation, like “no promo homo” laws. Check out our resources to learn about the importance of enumeration in anti-bullying policies and our model policies to help guide your own advocacy efforts in your states, districts, and schools.

Visit our policy pages to learn more about issues that affect you and find out which states are getting it right and where there is still work to be done.

Image
Join our Advocacy Network
Sign up for our advocacy updates.

LGBTQ students experience bullying, harassment, and discrimination at higher rates than their non-LGBTQ peers.These patterns of victimization have serious consequences. The 2017 National School Climate Survey revealed that 87.3% of LGBTQ students experienced harassment or assault based on personal characteristics, including sexual orientation, gender expression, gender, religion, race and ethnicity, and disability. But 55.3% of these students never reported incidents of harassment to a teacher, principal, or administrator. More supportive school environments are necessary for LGBTQ students—and all students—to thrive.

GLSEN advances enumerated anti-harassment, anti-bullying, and comprehensive school non-discrimination policies at the federal, state, district, and school level. Enumeration, or defining these specific classes or identity groups within a policy, underscores groups of students that research shows are most likely to be bullied and harassed and least likely to be protected by generic policies. Enumeration gives teachers and other educators the tools they need to implement anti-bullying and harassment policies, which makes it easier for them to intervene to prevent and stop bullying.

55.3% of LGBTQ students who experienced harassment or assault never reported incidents of harassment to a teacher, principal, or administrator.

Only 14 states provide non-discrimination protections to students on the basis of sexual orientation and gender identity.

On the federal level, courts have found that students have a right to be protected from harassment, bullying, and discrimination on the basis of their sexual orientation and gender identity under Title IX. GLSEN also champions our signature legislation, the Safe Schools Improvement Act, which would provide nationwide protections for LGBTQ students from bullying, harassment, and discrimination on the basis of sexual orientation, gender identity, and gender expression.

Just 14 states provide non-discrimination protections to students on the basis of sexual orientation and gender identity. The National School Climate Survey found that 62.2% of students reported experiencing LGBTQ-related discriminatory policies or practices at school, including being prevented from wearing clothes considered “inappropriate” based on their legal sex, accessing a restroom that corresponds with their gender identity, and being prohibited from discussing or writing about LGBTQ topics in school assignments.

In schools without specific policies protecting LGBTQ students and individuals, school personnel may fear that they will themselves be targeted for intervening on behalf of LGBTQ students. In the 2017 National School Climate Survey, students reported that teachers were significantly more likely to intervene when they hear homophobic remarks most of the time or always in schools with comprehensive enumerated policies, as compared to schools with either non-enumerated policies or no policies at all (27.9% vs. 13.6% vs. 8.4%). By providing educators with clear language that outlines their responsibility to provide protections for LGBTQ students, schools can make it easier, and safer, to encourage supportive educators.

87.3% of LGBTQ students experienced harassment or assault based on personal characteristics, including sexual orientation, gender expression, gender, religion, race and ethnicity, and disability.

LGBTQ-Inclusive and Supportive Teaching: The Experiences of LGBTQ and non-LGBTQ Educators

In cases where the law prevents any representation of homosexuality, LGBQ students may feel invisible as they are prevented from learning information about themselves and their communities in school. In cases where the law prevents positive portrayals of homosexuality and/or promotes negative portrayals, LGBQ students may receive negative messages about themselves, leaving them feeling stigmatized and alienated. In addition, other students may not have the opportunity to learn accurate information about LGBQ people, history, or events, which would potentially prevent prejudices, increase acceptance, and lead to a decrease in bias incidents at school.

While “no promo homo” laws don’t necessarily preclude educators from portraying transgender people and issues in school, educators who are prohibited from presenting homosexuality in a positive light may believe these prohibitions apply to transgender people and issues as well. It’s very likely that “no promo homo” laws may stigmatize transgender individuals and restrict transgender youth from learning about themselves and their communities in school. School staff, particularly those who are not educated on the parameters of the law, may avoid including LGBTQ topics not only in sexual health education, but also in other courses, and may refrain from demonstrating public support of LGBTQ students for fear of violating the law.

There are currently six states that have these types of laws: Alabama, Louisiana, Mississippi, Oklahoma, South Carolina, and Texas.

“No promo homo” laws may also have a detrimental effect on various other supportive actions that could be taken by educators, administrators, and students, such as establishing a Gender Sexuality Alliance (GSA) or similar student club, or providing staff training on LGBTQ topics.

All students deserve to be safe, included, and respected in school, regardless of their gender identity or expression—including transgender and gender nonconforming students. The 2017 National School Climate Survey shows that transgender youth face a harsh reality in too many of our nation’s schools. 94% reported hearing negative remarks about gender expression. More than half of transgender students face discrimination, with 50.9% of transgender students reporting having been prevented from using their preferred name or pronoun and 60% reporting being forced to use school facilities that don’t match their gender identity.

GLSEN and the National Center for Transgender Equality (NCTE) teamed up to create the Model School District Policy on Transgender and Gender Nonconforming Students which offers guidance and policy language for families, educators, and administrators to create and implement policies that ensure that their schools are fostering a safe learning environment for all youth. Key issues addressed are:

All students should have full access to all aspects of school life, including athletics. Athletics can and should provide a unique opportunity for inclusion for all students, regardless of race, religion, sexual orientation, gender identity, and/or gender expression. GLSEN advocates for policies that ensure that transgender students can participate in sports on a team or in competition based on their gender identity.

The Experiences of LGBT Students in School Athletics, a GLSEN research brief, reports that LGBTQ athletes have a GPA that is between 0.2 and 0.4 points higher on a 4.0 scale than students not participating in athletics and that 56% of LGBTQ team members and 66% of team leaders competing in high school sports report feeling a positive sense of belonging at school.  Despite this encouraging data, many states and school districts struggle with the issue of inclusion in athletics.

Currently, 19 state interscholastic athletic associations have policies that support participation by transgender K-12 student athletes on the basis of their gender identity, 13 states have no standard policies accessible to the public that guide transgender inclusion in sports, and 18 states have policies that prohibit participation by transgender student athletes. In these states, these policies are implemented by governing boards of state level interscholastic athletic or activity associations which each have their own composition of decision makers and process for altering policy and guidelines.

Currently, 19 state interscholastic athletic associations have policies that support participation by transgender K-12 student athletes on the basis of their gender identity.

In advocating for inclusive athletic policies, GLSEN asserts that: