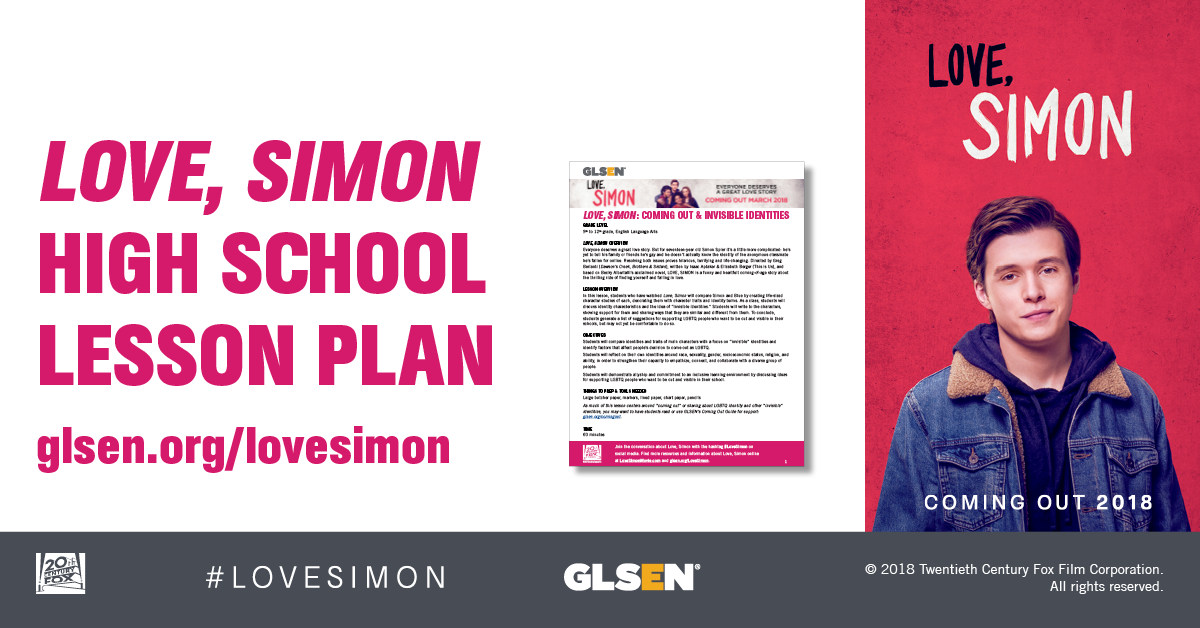 Everyone deserves a great love story. But for seventeen-year old Simon Spier it’s a little more complicated: he’s yet to tell his family or friends he’s gay and he doesn’t actually know the identity of the anonymous classmate he’s fallen for online. Resolving both issues proves hilarious, terrifying and life-changing. Directed by Greg Berlanti (Dawson’s Creek, Brothers & Sisters), written by Isaac Aptaker & Elizabeth Berger (This is Us), and based on Becky Albertalli’s acclaimed novel, LOVE, SIMON is a funny and heartfelt coming-of-age story about the thrilling ride of finding yourself and falling in love.

In this lesson, students who have watched Love, Simon will compare Simon and Blue by creating life-sized character studies of each, decorating them with character traits and identity terms. As a class, students will discuss identity characteristics and the idea of “invisible identities.” Students will write to the characters, showing support for them and sharing ways that they are similar and different from them. To conclude, students generate a list of suggestions for supporting LGBTQ people who want to be out and visible in their schools, but may not yet be comfortable to do so.

Students will compare identities and traits of main characters with a focus on “invisible” identities and identify factors that affect people’s decision to come out as LGBTQ.

Students will reflect on their own identities around race, sexuality, gender, socioeconomic status, religion, and ability, in order to strengthen their capacity to empathize, connect, and collaborate with a diverse group of people.

Students will demonstrate allyship and commitment to an inclusive learning environment by discussing ideas for supporting LGBTQ people who want to be out and visible in their school.

As much of this lesson centers around “coming out” or sharing about LGBTQ identity and other “invisible” identities, you may want to have students read or use GLSEN’s Coming Out Guide for support: glsen.org/comingout.

All About the Activity

1. (5 minutes) Introduce the lesson to students familiar with Love, Simon stating, “Today we will focus on the main characters Simon and Blue, and their identities around race, sexuality, socioeconomic status, gender, religion, and ability. We’ll also talk more about ‘invisible identities’, or identities people need to ‘come out’ about or share in order to be recognized.”

2. (20 minutes) Divide the class into partners or small groups. They should have their notes from the movie and two pieces of butcher paper large enough for your students to lie down and trace an outline. Students work together while one student lies on the paper and another traces their outline. They should repeat this so that each pair or group has two student outlines labeled “Simon” and “Blue,” respectively.

Note: The butcher paper can be placed on a table to help students with mobility challenges better reach their classmates for tracing. Alternatively, students can use smaller paper or paper that is pre-outlined to best meet individual needs.

4. (10 minutes) Guide students to re ect on their own identities around race, sexuality, income, religion, and ability. Have students divide a notebook or blank paper into six sections to generate words, labels, and/or symbols for their own identities for race, sexuality, income, religion, ability, and “other.” Tell students that this re ection can be done privately, and that what they decide to share in the writing assignment is up to them. After a few minutes of reflection, have students write individually to Simon or Blue as if it is the day after the school play and carnival. Following the pen-pal theme of Love, Simon, have students create imaginative letters, emails, blog posts, or text exchanges with one of the characters, showing support and sharing some similarities and differences as a friend.

5. (10 minutes) To conclude, tell students, “Actively hiding part of our identities isn’t easy, and doesn’t feel good. It can lead people to feeling depressed and to thinking that there is something wrong with who they are, whom they love, or how they express themselves. Being part of the LGBTQ community is important for many people all over the world, and more people every day are coming out. Still, it’s important that people get to decide for themselves when and if they come out, and who they share that information with.”

Did you participate in this activity? Tell us how it went and how it could have gone better! Email us at students@glsen.org or educators@glsen.org. Find more resources and discussions about Love, Simon Online at glsen.org/lovesimon.