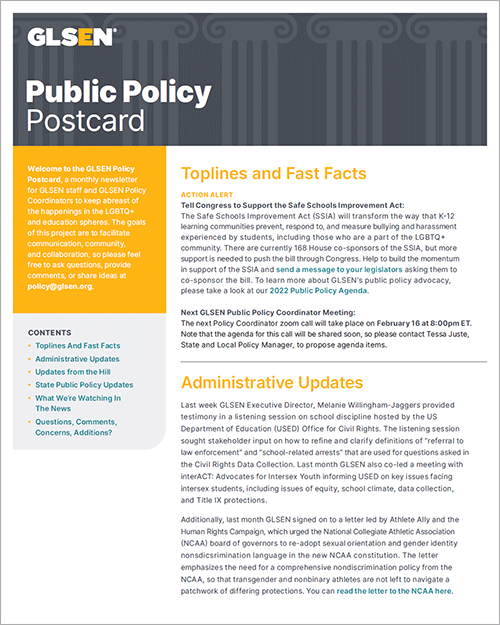 Documents
File
GLSEN_Public_Policy_2022_Postcard_Sept_Oct.pdf
Welcome to the GLSEN Policy Postcard, a monthly newsletter for GLSEN staff and GLSEN Policy Coordinators to keep abreast of the happenings in the LGBTQ+ and education spheres. The goals of this project are to facilitate communication, community, and collaboration, so please feel free to ask questions, provide comments, or share ideas at policy@glsen.org.
Share

Tell Your Senators to Support the Equality Act
Please continue to urge folks to contact their Senators asking them to pass the Equality Act, which will explicitly protect against discrimination based on sexual orientation and gender identity in all spheres of public life, including education. Participate in this action alert and disseminate it to your networks. To learn more about GLSEN’s public policy advocacy, please take a look at our 2022 Public Policy Agenda.

Tell U.S. Senators to Pass the LGBTQI+ Data Inclusion Act
This legislation would ensure that federal agencies collecting demographic data through surveys allow those who take their survey to self-report their sexual orientation and gender identity. Surveys are often the only means that educators and policymakers have to gain insight into the experiences of LGBTQ+ youth and identify evidence-based programs and activities that foster safe and inclusive schools. The House passed this bill in June; participate in this action alert to urge your Senators to pass the LGBTQ Data Inclusion Act.

New GLSEN National Policy Staff
This month GLSEN welcomed Victoria Rodríguez-Roldán as the Director of Public Policy. Victoria’s expertise and advocacy are grounded in an intersectional focus on racial, disability, and LGBTQ+ justice. You can learn more about GLSEN’s public policy advocacy here.

State Policy Fellows Welcome Meeting
On Wednesday, October 19 at 7:30pm ET, GLSEN will have its first State Policy Fellows Orientation Meeting. The agenda for this call will be shared soon. Contact Tessa Juste, State and Local Policy Manager, at tessa.juste@glsen.org, if you have any questions in advance of the convening.

Last month GLSEN authored a public comment letter in response to the The Department of Education’s (USED) proposed rulemaking on Title IX, which is the primary federal law banning sex discrimination in educational settings. Over 250 education, civil rights, and youth-serving organizations signed on to the public comment, including co-lead organizations, The American School Counselor Association, the Human Rights Campaign, interACT: Advocates for Intersex Youth, the National Association of School Psychologists, the National Association of Secondary School Principals, the National CEnter for transgender Equality, the National PTA, the National Women’s Law Center, and PFLAG National. The proposed rule affirms that discrimination and bullying based on sexual orientation, gender identity, sex characteristics (including intersex traits), and sex stereotypes are illegal discrimination requiring a prompt and effective school response. GLSEN’s comment letter expresses support for this stance and makes some additional recommendations including:

“We’re grateful to be in community with other leading education, civil rights and LGBTQ+ justice organizations in defending protections against sex-based discrimination under Title IX. We applaud the U.S. Department of Education for affirming that discrimination against LGBTQ+ youth is prohibited. Despite the progress we’ve seen under Title IX over the years, LGBTQ+ students still face significant barriers at school and more recently, there has been a devastating, coordinated effort from radical politicians to erase transgender and LGBTQ+ people from schools. We will continue to work with the department to strengthen this rule.

“At the same time, some of the biggest obstacles to inclusion for trans students in school right now are actually politicallymotivated state bans and the shameful actions of extremist justices in the U.S. Supreme Court, which have called the very existence of our basic civil rights into question. Now more than ever, it is important to rise up for our LGBTQ+ youth and do everything we can to bolster protections for students under Title IX. We must select more leaders who will stand in solidarity with marginalized people’s movements for justice. We have some powerful champions, but we need more elected champions on our side to achieve the numbers we need to drive bold legislative change for equal opportunity and access to education for all young people, regardless of sex, including sexual orientation or gender identity.”

Additionally, last month GLSEN provided testimony to a listening session on LGBTQI+ data inclusion to the Office of Science and Technology Policy’s Subcommittee on Equitable Data, and sent a letter to the subcommittee with several data inclusion recommendations for the data collections facilitated by the Centers for Disease Control’s Division of Adolescent and School Health, the National Center for Education Statistics, the Office of Management and Budget, and the USED Civil Rights Data Collection. Additionally the letter urged passage of the LGBTQI+ Data Inclusion Act, which requires federal agencies that collect information through a survey that includes demographic data to review existing data sets to determine in which data sets information about sexual orientation and gender identity is not included, and to assess needed changes in survey methods related to asking questions on sexual orientation and gender identity. Further, GLSEN signed on to a letter led by the Center for American Progress urging LGBTQI+ data inclusion.

Finally, this month GLSEN has signed on to a letter led by the Leadership Conference on Civil and Human Rights, addressed to the Department of Health and Human Services (HHS). The letter supports HHS’s proposed rule’s provisions for LGBTQ+ nondiscrimination in health programs and activities. The letter also urges the HHS to ensure that the final rule additionally includes robust enforcement mechanisms to prevent discrimination and remedies should any such discrimination occur, as well as disagregated demographic data to support HHS’s enforcement efforts.

Updates from the Hill

GLSEN continues to work in coalition to support passage of the Equality Act, which amends the Civil Rights Act of 1964 and other civil rights laws to establish explicit federal nondiscrimination protections for LGBTQ+ people in housing, employment, public education, credit, public spaces, federally funded programs, and jury service. Further, it prohibits discrimination against women for the first time in public spaces and federal programs, and prohibits racial and religious discrimination in public spaces not covered by current law. You can learn more about the Equality Act from this fact sheet, and you can use this link to send a message directly to your Senators urging them to pass the bill. Learn more about GLSEN’s federal legislative priorities from the GLSEN 2022 Public Policy Agenda.

Last month Virginia’s Department of Education announced new guidelines that would reverse Virginia’s previously adopted nondiscrimination protections for transgender and nonbinary students. Moreover the new policy would force schools to out youth in schools to unsupportive guardiance, force educators to misgender students, and deny access to restrooms and other school facilities that match their gender identity. These proposed guidelines directly violate the Virginia Human Rights Act, which provides nondiscrimination protections on the basis of sexual orientation and gender identity, as well as Title IX. Students across Virginia coordinated massive school walkouts to protest the proposed policy. In a statement denouncing the new guidelines, Aaron Ridings, GLSEN’s Chief of Staff and Deputy Executive Director for Public Policy and research said:

“Governor Youngkin’s actions are reprehensible. Politicians, school officials, or anybody else, for that matter, have no business policing young people’s gender identity. Rolling back protections for trans students will have a devastating impact on young people – our research shows that when trans and nonbinary youth face hostile school climates their mental health and academic achievement suffer. Every young person in America, including transgender and LGBTQ+ youth, should feel safe, supported, and able to concentrate on their academics at their schools without worrying about whether they can use the bathroom or talk to a teacher for support.”

Throughout the state legislative cycle GLSEN tracks bills that have been introduced in all 50 state legislatures, the District of Columbia, and U.S. territories. Currently, GLSEN is tracking 22 bills that are affirming of LGBTQ+ students and inclusive K-12 learning communities, and 205 discriminatory bills that target LGBTQ+ youth. The legislatures still in regular session this year are Ohio, Michigan, Pennsylvania, and New Jersey; Oklahoma is in a special session. In particular, GLSEN is monitoring several bills in Ohio that target trans youth in K-12 learning communities, including HB 616 which is a curriculum censorship bill, HB 151, an anti-trans athletic participation bill, and HB 722, a bill that could force educators to out queer and trans youth to unsupportive guardians. To learn more about the specific content and legislative progress of all of the state bills that GLSEN is tracking, you can visit our and our 2022 Negative Bill Tracker.

GLSEN has just launched a new resource on the GLSEN Navigator, called GLSEN Advocates. not only maps out each state where there is a GLSEN chapter, but for each state, territory, and the District of Columbia, the Advocates map provides contact information for the State Policy Fellow who is the lead liaison for policy advocacy in that state, for GLSEN Chapters, and for the regional Freedom Fellow who advises and supports the GLSEN chapter network on topics affecting LGBTQ+ students in that state. There is also contact information for GLSEN’s Youth Programs and GLSEN’s Education Programs. With this tool, folks who wish to reach out to GLSEN will be enabled to connect with the correct channel right away, no matter where they live in the country.

This month GLSEN is hosting a National Safe Learning Partnership (NSLP) members meeting, on Thursday, October 27 at 4:00pm ET. The meeting will touch on Federal Title IX efforts, what to expect in the 2023 state legislative cycle for LGBTQ+ education policy, and advocacy goals, such as passing inclusive curricular standards legislation. NSLP members will be invited to join the meeting through the NSLP listserv. To become an NSLP member organization please reach out to policy@glsen.org.

What We’re Watching in the News

How Supportive Are Schools of LGBTQ Kids? CDC Data Offer a Glimpse.
Evie Blad. Education Week, August 30, 2022.
This article is about the CDC’s recently published School Health Profiles report, and in particular, the report’s findings on School Climate for LGBTQ+ youth in schools.

Who’s Behind the Escalating Push to Ban Books? A New Report Has Answers.
Eesha Pendharkar. Education Week, September 19, 2022.
This article is about the different groups behind the trend of LGBTQ+ and Race-related book bans across the country highlighted in a report from PEN America.

Rising Tide of Censorship and Scrutiny has Schools Scrambling to Avoid Backlash.
Patrick Wall. Chalkbeat, September 23, 2022.
This article is about the chilling effect on educators’ discussions with students about sexual orientation, gender identity, and race in the atmosphere of curiculum censorship pervading state education policy.

QUESTIONS, COMMENTS, ADDITIONS?
Have a note to add for next month’s postcard? See a mistake that needs correcting? Want more resources or information? Let us know what more you would like, and even what you would like less of. Please contact policy@glsen.org.