The Complex Role of LGBT Affirmative Supports at School 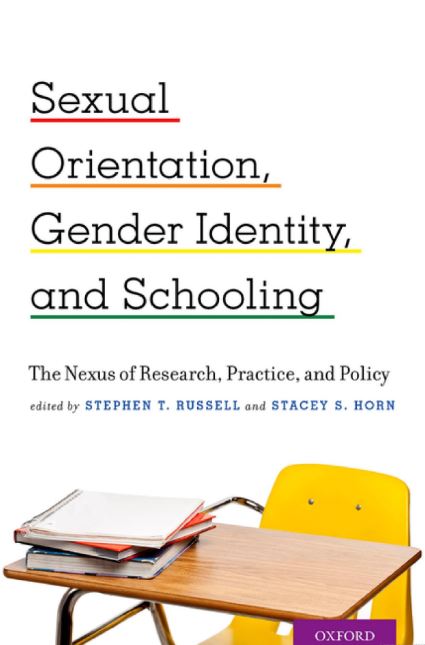 In: Sexual Orientation, Gender Identity, and Schooling: The Nexus of Research, Practice, and Policy (2016)

"There has been dramatic social change with respect to lesbian, gay, bisexual, and transgender (LGBT) rights around the world in the last decade. Yet legal protection and inclusion remain limited for LGBT youth. The context of schooling is especially important-schools remain the primary societal institution to which most youth have access and in which nearly all youth spend some significant portion of their lives. LGBT youth are at risk for some of the greatest difficulties experienced by adolescents, and many of those problems have been traced directly to negative school experiences. Research shows that anti-LGBT school victimization results in poor academic performance and negative school attitudes, mental health, and risk behaviors. New studies have identified characteristics of schools that are associated with inclusion and safety for LGBT students, including practices and policies that are associated with positive school climate and student wellbeing.

Sexual Orientation, Gender Identity, and Schooling brings together contributions from a diverse group of researchers, policy analysts, and education advocates from around the world to synthesize the practice and policy implications of research on sexual orientation, gender identity, and schooling. The book is interdisciplinary, as studies of LGBT students and schooling have emerged across disciplines including education, clinical, school, and developmental psychology; sociology; and public health. Included are syntheses of key areas of research; examples of new international models for educational practice; case studies of transformational policy and practice; and specific examples of the nexus of research, practice, and policy. The fundamental goal of this book is to advance social justice related to sexual orientation and gender identity through strengthening the relationship between research, practice, and policy to support LGBT students and schools. It will be of interest to school, developmental, and clinical psychologists, educators and school administrators, and LGBT scholars."