Erasure and Resilience: The Experiences of LGBTQ Students of Color 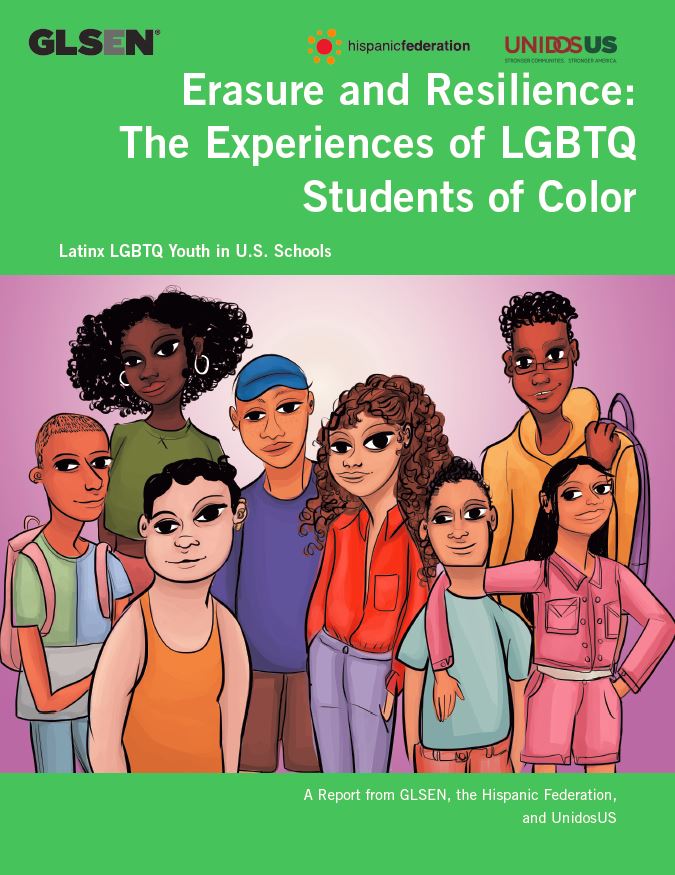 Experiences of racism, homophobia, and transphobia in U.S. schools are prevalent among LGBTQ youth of color. Prior research on LGBTQ youth of color in general has shown that schools nationwide are hostile environments for LGBTQ youth of color, where they experience victimization and discrimination based on race, sexual orientation, gender identity, or all of the above simultaneously. In addition, many LGBTQ youth do not have access to in-school resources that may improve school climate and students’ experiences, such as student clubs and supportive educators. Because LGBTQ students of color are not a monolithic population, this report focuses solely on the school experiences of Latinx LGBTQ youth, examining indicators of negative school climate, as well as supports and resources.

This report was developed by the GLSEN Research Institute, in partnership with Hispanic Federation and UnidosUS, and examines:

Scroll down for more information about supporting Latinx LGBTQ youth.

UnidosUS (formerly known as National Council of La Raza) has remained a trusted, nonpartisan voice for Latinos since 1968. UnidosUS serves the Hispanic community through their research, policy analysis, and state and national advocacy efforts, as well as in their program work in communities nationwide. UnidosUS also partners with a national network of nearly 300 Affiliates across the country to serve millions of Latinos in the areas of civic engagement, civil rights and immigration, education, workforce and the economy, health, and housing.

Check out our webinar about the school experiences of Latinx LGBTQ secondary school students in the United States. In the webinar, GLSEN Research Institute staff highlight findings from our research report Erasure and Resilience, including feelings of safety and experiences with harassment and assault at school, school discipline, and school supports and resources.

Then, David Pérez (Senior Director of Donor Relations at Hispanic Federation) and Washington Navarrete (Education Leadership Program Manager at UnidosUS) discuss what the report means to them, and how it can be used for their work. The webinar ends with a Q&A session.

We have identified critical topics from our research that we are highlighting in the infographics below. Click on the images to download them and share online today, and continue the conversation.

Image
Image
Image
Kit Espacio Seguro
To help ensure safer classroom spaces for all students, we have translated our Safe Space Kit into Spanish. Click below to download!
Download Now

Why Every Child Should Read Books About Diverse Cultures

Why These 10 Latinx Icons Are Inspiring to LGBTQ Youth

Check out these additional resources to support Latinx LGBTQ students: